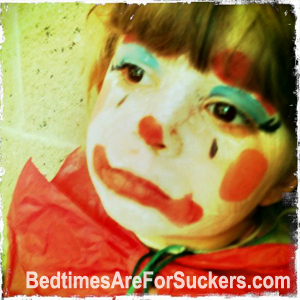 The tears of an only child preschool clown.

In case you haven’t figured it out by now: I’m an only child. Yes, my parents, underachievers that they are, decided to have just one kid. I used to think it was kind of cool — but recently, it hit me:  I’m getting ripped off big time! Being an ‘only’ means that I’m stuck with my “parents” until I run away from home (Which I’ve  planned for the moment I’m allowed to cross the street by myself). Oh, and make no mistake, a sibling-free life is my destiny. Judging from the number of spider veins I’ve counted on my mom’s legs–at last tally, a whooping 20 hundred–there’s not a chance in hell she’s young enough to pop out another kid. That said, here are just a few reasons being an only child bites:

You Get All of Your Parents Undivided Attention. Always. Forever.
You know how irritating it is to have someone read over your shoulder (I don’t read yet–but when I do you can bet it’ll piss me off.) That kind of lurking, hoovering bullshit is pretty much de rigueur at my house. Yes, occasionally I do get some private time to, say,  fill all the cooking pots with water, creating individual swimming pools for each of my dolls and subsequently flooding the kitchen. But that kind of freedom doesn’t come often enough.

There’s No One to Commiserate With
When mom and dad have one of their scintillating debates/screaming matches over who does less of the housework who can I turn to and roll my eyes? My fish?  Sasha is hardly a great companion — hell, she doesn’t even like to be petted — and believe me I’ve tried.

There’s No One to Blame Shit On
Take this for example: I have this mechanical Zhu Zhu pet hamster. (BTW my parents refuse to get me a proper mammalian pet until they’re sure I won’t try to dress it up in my doll clothes),  anyway… the thing’s busted. It won’t budge. I tried to explain to my mom that SOMEONE tried to see if they could jam a rainbow scrunchie in between the wheels (it wasn’t me!) and now it won’t work. What pisses me off is that she assumes I did it — she didn’t even bother confronting my dad.

You Can’t Join in on Sibling Chat
This happens at least once a week — I’m hanging out with my preschool peeps, chatting over some warm apple juice and Emma will start blathering about her new baby sister and how she gets to help change her diaper. Then someone else’ll chime in about some other sibling story. After about 5 minutes,  I swear I want to put a Nerf foam bullet in my head. I get it. You’re a big brother or sister. Sweet. Now STFU.

3 thoughts on “4 Reasons Being an Only Child Blows”

Leave a Reply to The Bearded Iris Cancel reply