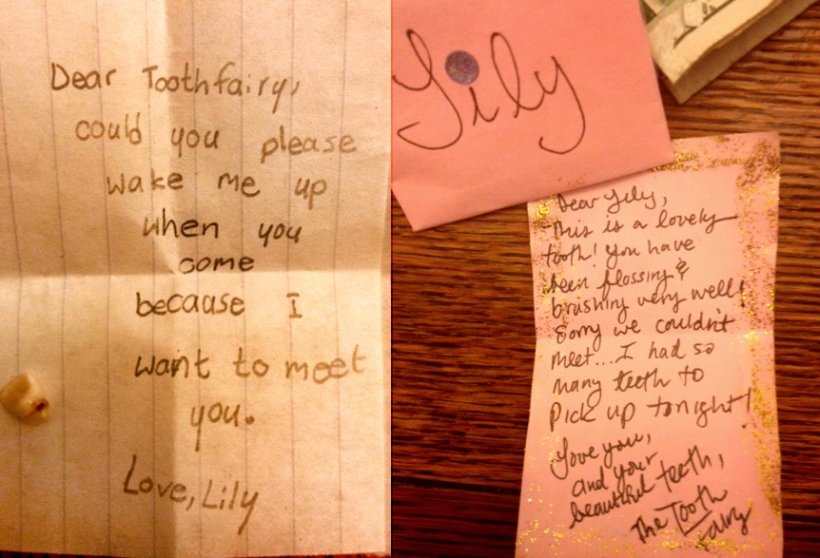 On the left, my very well-crafted and polite note to the tooth fairy. On the right, her bullshit response.

Last night the Teeth Buy Back program I’ve been participating in for the last couple years didn’t go as planned — And NOT because I only got 5 lousy bucks for a big front tooth instead of $20 like that 3rd grader,  Josselyn claimed.  No, it was because the Tooth Fairy didn’t even have the courtesy to wake me up as I requested so I could talk to her. [See note above] Apparently she was too busy to meet with a client who has consistently supplied her with pearly whites for the past 2 years. She’s like a tooth-junkie, always after her next fix. Am I the only kid who has Lindsey Lohan as their tooth fairy?!

I don’t know what the big deal would have been– it would’ve been a quick conversation. I just wanted to ask her a few questions like: Why are all the notes she leaves written on the same paper and glitter glue we have in my art box? And why are the envelopes sprayed with what smells like my mother’s perfume?  And finally,  why doesn’t she look into another line of work that doesn’t involve skulking people’s houses at night collecting dead things that fall out of kid’s mouths? Yuck.

The truth is,  I think some weird sh*t is going on — either some diminutive fairy is stealing my art supplies and my mom’s perfume  OR someone from inside the house is f*cking with my head. I will keep you posted.